This is how you can get in touch with us ...

... and rest assured that we’ll take care of it, whatever your concern may be.

Send us an eMail:

35 years of TFU - and going strong

The last 35 years have shown that large companies are getting rid of more and more jobs. As a rule, new jobs are only created in small and medium-sized enterprises or through start-ups. In this context, the starting conditions and chances of survival for young companies need to be improved.

A start-up and technology centre offers a suitable solution.

2020
Roof renovations at the Biotechnology Centre are pending. Pre-Seed is being pursued with a vengeance; we are awaiting the first rounds of financing with investors.

TFU will become climate-neutral as of 1st January 2020.

2019
The BW Pre-Seed start-up picks up speed. By the end of the year, we have secured the approval for 12 projects and therefore EUR 2.3 m for our start-ups, the launch of which would otherwise not have been facilitated (as well).

TFU goes China. As a representative of the Ulm/Neu-Ulm region, we sign a letter of intent for co-operation with the Bao’an district of Shenzhen in June. In January, we are already on site with Mayor Czisch and District Administrators Scheffold and Freudenberger.

2018
TFU submits numerous proposals for tenders and is appointed as a pilot partner for the new BW Pre-Seed start-up project by the Ministry of Economics, Labour and Housing of the State of Baden-Württemberg. We now have the right to propose a pot of EUR 14 million for low-risk early-stage financing.

2016
The aim of the TFU SME partnership is to guide companies thinking about new business models and enabling SMEs to utilise the start-up atmosphere.
A whole new approach that looks at the impact of digitisation and sets its sights on Industry 4.0 in order to proactively and purposefully deal with new environments and opportunities.

2015
An opportunity for particularly favourable space comes up in Ehingen. The TFU and the BED - Business Centre Ehingen - have joined forces to provide Ehingen founders with optimum support and advice from our start-up and technology centre.

TFU’s 30th anniversary - a cause for celebrations at all locations.

Starting a business successfully requires a solid foundation. Also, and especially when it comes to food. Together with neighbouring companies and the ‘Grüner Zweig’, Science Park II opens a canteen where people with and without disabilities prepare delicious fresh food. The response is very good

2012
The TechnologieFabrik, the original nucleus of the TFU, is getting a bit old in the tooth. Since the building would have to be renovated at high cost, the shareholders decide to part with the TechnologieFabrik and relocate the site to Obere Eselsberg. In Science Park II, the TFU purchases the Lise-Meitner-Forum built by PEG, which has almost twice as much space and already meets modern office technology requirements. Its proximity to the university and other highly innovative neighbours serves as an ideal environment for start-ups.

2010
The TFU celebrates its 25th anniversary.
The business development agencies, the chambers of commerce and industry and the chambers of skilled trades are working closely with the TFU to produce an overview brochure on offers for start-up entrepreneurs in the region, to be published in May 2010.

2009
After 15 years of rental, the Innovation Centre reverts back to the EADS in accordance with the contract.
The TFU now has a total of 8,500 m² at its disposal and is therefore still one of the largest centres in Germany.

The Ulm and Neu-Ulm-Illertissen savings banks withdraw from the circle of shareholders.
Approximately 90% of all TFU shareholders are now municipal.
A viable agreement on possible deficits is drawn up. The TFU has its most successful year ever.

2007
The GründerZentrum Neu-Ulm celebrates its 10th anniversary.
The shareholders approve the renovation of the BiotechnologieZentrum, therefore allowing RMT GmbH to move in as anchor tenants, who have cleanrooms installed in the basement and ground floor.

2006
The shareholders realign the company. The IHK Swabia, Handwerkskammer Ulm and Ulmer Volksbank withdraw from the circle of shareholders.
The business management is assigned to Steinbeis Beratungszentren GmbH, with Ulrike Hudelmaier appointed as managing director.

2002
Phase 2 of the BiotechnologieZentrum starts with 2 young biotechnology companies.
With a total area of around 11,000 m², the TFU is one of the largest technology centres in Germany.

2001
To establish the second phase of the BiotechnologieZentrum, the TFU purchases a building on the former EADS site. Start of renovation measures for further laboratories. 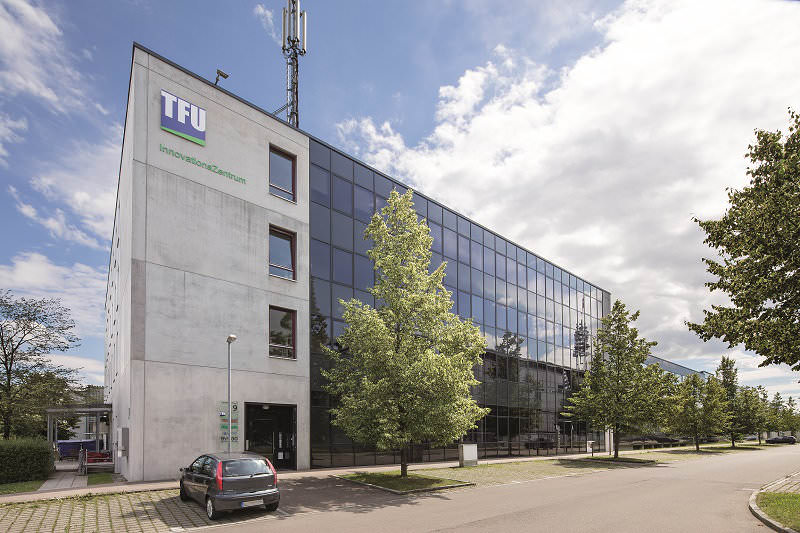 1998
The TFU receives funding for the expansion of the first phase of the BiotechnologieZentrum. Laboratories are set up and put into operation in the basement of the InnovationZentrum building.

1997
Financially supported by the Free State of Bavaria and the City of Neu-Ulm, the TFU converts a former barracks into the GründerZentrum Neu-Ulm. This means that 8,000 m² are now available for company founders and young entrepreneurs.
The district of Neu-Ulm becomes a co-partner.
The TFU is the contact point for the Gerling Innovation Fund.

1996
The name of TFU-TechnologieFabrik Ulm GmbH is changed to TFU-Technologie- FörderungsUnternehmen GmbH.
The University of Ulm becomes a co-partner.
The TFU coordinates the BioRegio competition for the region.

1995
The TFU is expanded by an InnovationsZentrum on the DASA site. The EU and the state of Baden-Württemberg support the project. The official commissioning of the InnovationZentrum takes place on 11 December with 11 other companies. The first Internet connection is established at the InnovationZentrum via the University of Ulm.
The TFU submits an application for the construction of a BiotechnologieZentrum.

1992
The TFU organises the first joint trade fair booth for the 11 companies at the InterTech (International Technology Fair) in Sankt Gallen (Switzerland).

1991
The TFU and Science Park companies present themselves together at a first in-house exhibition.

1985
As one of 13 technology centres, the TFU is included in the TOU pilot project for technology-oriented business start-ups of the Federal Ministry of Education and Research.
All city factions welcome the plans for a technology centre.
The City of Ulm, Neu-Ulm, Ulm Chamber of Commerce and Industry, Ulm Chamber of Trade, Sparkasse Ulm, Kreis- und Stadtsparkasse Neu-Ulm and the Ulmer Volksbank establish the TFU-Technologiefabrik Ulm GmbH. The Alb-Donau district only becomes a co-partner of the TFU at a later stage.
The TFU Advisory Board is established and chaired by the Government Commissioner for Technology Transfer, Prof. Löhn. The Advisory Board also includes the University of Ulm, the Ulm University of Applied Sciences and the head of the Daimler-Chrysler Research Centre.
The TFU is officially opened with the first 5 companies on 05 November 1985.
Prof. Katz and Dr. Schmihing are appointed as managing directors. Hans Kloos takes over the management of the centre.

1984
The Ministry of Economic Affairs publishes requirement profiles and location requirements for the establishment of regional technology centres in Baden-Württemberg. Opportunities and risks are discussed in Ulm and the Ulm Chamber of Commerce and Industry develops a concept. 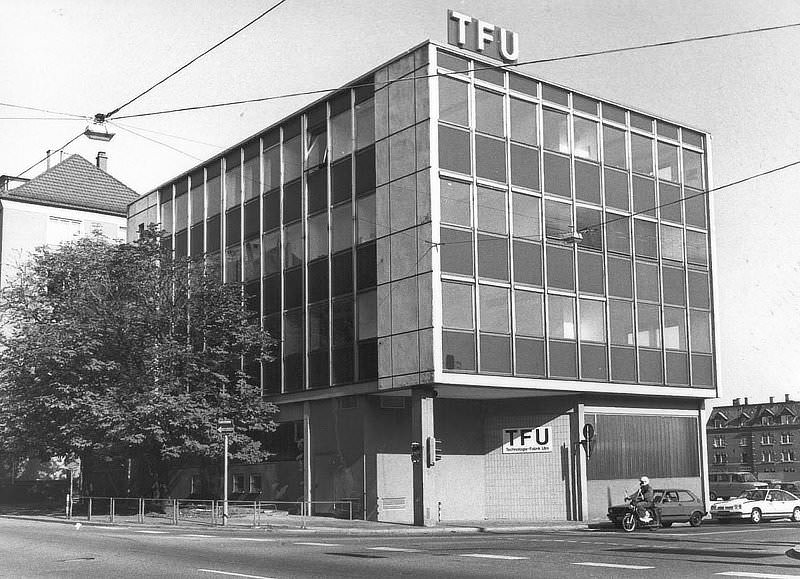